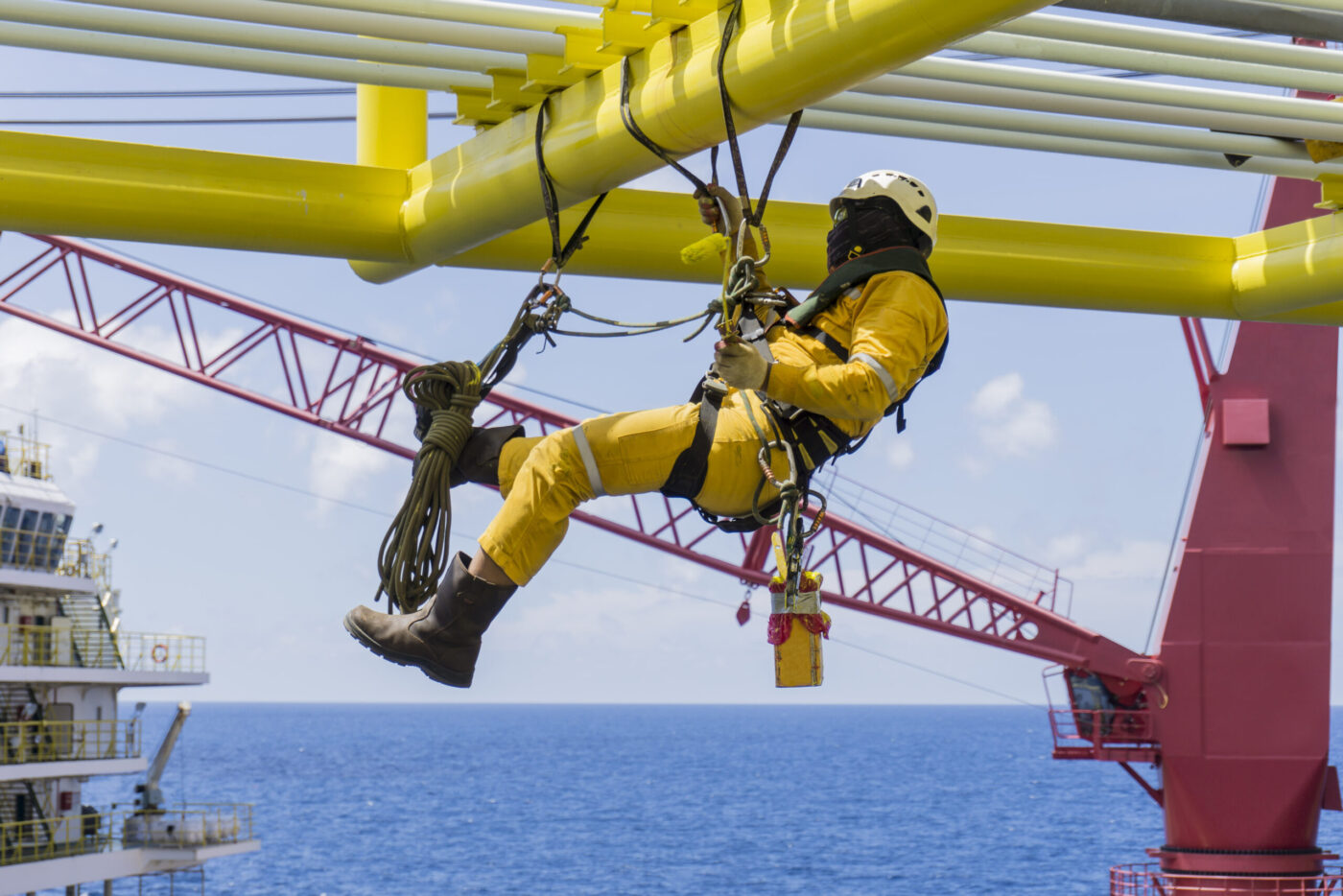 Offshore, oil and gas industries are dangerous for workers if the correct safety procedures and equipment are not in place. According to Offshore, Ill Health and Incident Statistics published by HSE, injuries from slips, trips and falls, including falls from heights, account for 52% of all major injuries at offshore sites, particularly where fall protection equipment is inadequate.

Good practice guidelines for working at height (WAH) from the G+ Global Offshore Wind Health and Safety Organisation suggest a hierarchy of protective measures. WAH should be avoided where possible, but where this is not reasonably practicable, offshore sites need to have collective protection (such as fixed guardrails), and personal protection (such as fall prevention or restraint systems).

Consulting safety experts is the most efficient way of finding equipment that is best suited for your site or for any given application, as well as ensuring that your workers are correctly informed on how to use the equipment.

Carroll Technologies has more than 40 years of experience providing safety expertise and industry-leading safety equipment, and has searched the market for the best of the best. Carroll supplies offshore fall protection equipment such as harnesses, hooks and shock-absorbing lanyards from trusted manufacturers.

From MSA, Carroll supplies rugged, energy-absorbing lanyards that keep fall arrest forces below 6 kN. MSA’s restraint lanyards are designed to be placed between the anchor point and the harness, which prevents workers from dropping into the fall area.

Honeywell’s Miller brand provides a high-quality range of full protection solutions, including its harness and fall limiters. The Miller AirCore harnesses are lightweight and made from corrosion-resistant aluminium and breathable open-core padding to allow for optimal airflow, as well as reduced heat and moisture entrapment.

Carroll Technologies also supplies fall protection equipment for most industrial applications, including fall protection for the mining and tunnelling industries. Contact us to discuss your project.

Carroll Technologies reviews some of the worst mine collapses in North America.

On December 14, 2020, the roof of the Avery Island salt mine operated by Cargill collapsed, resulting in Rene Romero, 41, and Lance Begnaud, 27, losing their lives.

The mine was shut down immediately after the incident while rescue efforts were underway, and it was permanently closed six weeks later.

The widows of the miners who lost their lives filed lawsuits, citing that known roof collapse hazards were ignored, mining regulations were not followed, and specifically that the two men were killed during a failed attempt to preserve profitable salt mining operations at the mine. The Cargill salt mine roof collapse is a prime example of the importance of listening to safety inspectors, and the catastrophic consequences if operators do not have adequate procedures in place.

Fortunately, the series of roof collapses at Donkin mine in Cape Breton did not result in any workers being injured. However, the operator, Kameron Coal, was fined $2,000 for an accumulation of combustible coal dust and a further $2,000 for failing to implement a safety plan that “may have provided an indication that the roof strata were exhibiting signs of potential failure.”

As mining excavations go deeper, the focus on rock support to prevent roof and floor failure has never been more important. The failure of hard roof strata can be the most violent dynamic instability event in underground longwall mining.

In 2015, one worker, John Garloch, 45, was killed and two others were injured in a coal mine roof collapse at the McElroy Mine in Marshall County, West Virginia. The incident was attributed to a “rib roll”. In underground mines, the walls or sides of travel ways are referred to as ribs and need to be secured.

According to Lima Ohio news: “MSHA inspectors have issued 189 citations to the mine for alleged violations that included coal dust accumulation, hazardous conditions, noise exposure levels, air quality and other safety issues. The mine received 970 citations in 2014.”

Carroll supplies a broad range of industry-leading equipment from trusted manufacturers such as MSA and Honeywell Safety, with offerings such as harnesses, hooks and shock-absorbing lanyards.

MSA energy-absorbing lanyard keeps fall arrest forces below 6kN, while the restraint lanyards are designed to be placed between the anchor point and the harness to prevent workers from dropping into the fall area.

Honeywell provides a new generation of full protection solutions under its Miller brand. The light-weight Miller AirCore harnesses are manufactured from corrosion-resistant aluminium and breathable open-core padding to allow for optimal airflow, as well as reduced heat and moisture entrapment.

Over the past ten years, 29 miners have lost their lives after they fell from an area where they worked. Having a fall prevention plan in place, in addition to high-quality equipment, is the best way to ensure that these tragedies are not repeated.

MSHA makes a number of suggestions when it comes to best practices for developing a fall prevent plan for industry, including providing mobile or stationary platforms at locations where there is risk of falling.

Industries should also assign a safety harness and lanyard to any miner who works at an elevated height, and they must have a stable and secure anchor point for the lanyards to be attached to, which should be regularly inspected. MSHA also recommends physical barriers around all floor openings.

For areas where fall protection equipment is required there should be visible signage, and work areas and tasks should be designed to minimize fall hazards.

Safety regulation 56/57.11001 indicates that a safe means of access should be provided and maintained to all working places. 56/57.15005 states that safety belts and lines should be worn when there is a danger of falling, and a second person shall tend the lifeline when bins, tanks, or other dangerous areas are entered.

Both onshore and offshore wind farms will require guard rails, safety nets, and personal fall protection equipment (such as lanyards and harnesses) to keep workers safe when they climb turbines. Hard hats are also necessary if there is a risk of equipment or debris falling.

Inside the turbine, workers are restricted to confined spaces, where exit routes should be clearly marked. Additionally, during the manufacturing of wind turbine blades, workers may be exposed to dust or harmful gases, so they must be protected by a reliable ventilation system and the use of protective personal equipment (PPE) such as respirators and gas detection devices.

Solar panels are heavy and may be installed on elevated areas or rooves. Personnel need to be supplied with fall protection equipment and reliable PPE, as well as adequate training, to keep them safe.

Electrical safety may also be a concern, so shock risk assessments need to be carried out. In addition to safety measures such as circuit breakers, personnel should be equipped with insulated tools, voltage-rated gloves, and provided with safety training.

According to the Occupational Safety and Health Administration, vehicle accidents, being struck by or caught between equipment, fires, falls, and chemical exposures are just some of the hazards that workers face at oil rigs. In fact, the Census of Fatal Occupational Injuries declared that between 2013 and 2017, 489 oil and gas extraction workers lost their lives on the job.

Flammable gases and spark-producing equipment can be a deadly combination, so oil rigs require rugged fire and gas detection systems with sensors and alarms, as well as integrated safety and emergency management systems, to ensure complete control and visibility.

Surveillance cameras such as closed-circuit television (CCTV) are used for machine monitoring as well as an anti-piracy deterrent. At oil rigs, they are used to monitor pumping and control rooms and to keep all areas of the platform secure.

Communication is always key, and oil rigs require rugged intercom and radio communication systems to keep in contact, as well as be alerted to any potential danger. Oil rigs also utilize technology for personnel tracking systems such as satellite-based location tracking with GPS for collision avoidance and tracking personnel to ensure that they do not enter danger zones or off-limit areas.

Personal protection equipment at oil rigs needs to be rugged, reliable and durable. Oil rig hard hats, such as NLT cap lamps, can incorporate LED technology, as well as proximity and tracking tags.

Slips and falls are one of the main causes of injury at oil rig sites. Reliable fall protection is essential for keeping workers safe, and the industry offers a broad range of equipment, from high-quality harnesses and sturdy hooks to shock-absorbing lanyards.